The Difference We Make

If you’ve read my blog for very long, you’ll know I’m a huge fan of Fringe. It is one of the best shows on TV, full of great characters and thought-provoking plots. Episode 2 of this year, One Night in October (click link to watch for free while it’s still available), had everything I love about this show.

For those who don’t watch Fringe, here’s the set-up: imagine there is an alternate universe, a place where we exist but have made different choices leading to different outcomes and consequences. And what if you could cross from our universe into this alternate reality?  That is exactly what scientist Walter Bishop did 20 years ago after his son dies of a rare genetic disease. His goal? To bring his son’s counterpart back with him so he can cure him of the same disease.  Only after he’s cured, Noble can’t bear to take him back.  And thus begins a cascade of consequences that lead to a near war with the Other Side and some very strange “Fringe” events. 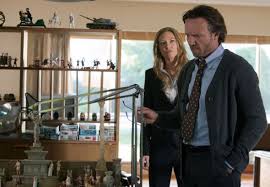 In this episode, the Other Side asks for help from our side. They are hunting for a serial killer and hope that our version, who is a serial killer expert who often aids the police, can help. I won’t spoil the rest story for those who may want to watch it or read this synopsis, but it is a great tale of the impact we make in the lives of others.

The difference between a serial killer and a serial killer expert, we learn, was one kind woman who loved an abused young boy unconditionally. In one universe she crossed paths with the youngster on the edge of becoming a monster.  In the other reality, she didn’t, the consequences horrific. It’s a dark version of It’s a Wonderful Life, and just as in that speculative fiction classic, it gives us a glimpse in our own hearts and lives of the impact we make on others.

Each of us may be heroes or villains and never know it.  And that is the glaring truth we tend to block out with the lie that “it doesn’t matter”. Yet that doesn’t change the fact we each make a difference whether we accept it or not. The catch is that we usually never know our great moments until they are past.

But then again, maybe all our moments are great ones.

EDC is an award-winning author with a passion for telling imaginative stories resonating with universal truths. His latest novel, Runaway, is a futuristic action/adventure inspired by the book of Philemon. EDC was born in Georgia, growing up in the suburbs of Atlanta, where he now lives with his wife, Amy, and daughter, Emma. Besides writing and being employed as an analyst in the airline industry, he has worked as a volunteer with youth, church planting, and Compassion International. He enjoys landscape gardening, listening to alternative rock, and playing the swordfight game on Wii Sports Resort.
View all posts by EDC →
This entry was posted in Ethics, Philosophy, and Religion, Inspiration and Motivation, Opinion, Reviews, Speculative Fiction, TV and Movies and tagged alternate realities, consequences, Fringe, One Night in October, Review, the difference we make. Bookmark the permalink.