Though my latest novel, Runaway, is a futuristic novel, it’s also a historical one.  No, it doesn’t include the speculative fiction staple of time travel. It’s actually a futuristic retelling of an old tale, specifically the letter to Philemon from the Apostle Paul in the Bible. Unfortunately, since Runaway was tied to history and to scripture, I had to do all the same kinds of research as if I were writing a historical novel. I read everything I could find on the cities of Ephesus and Colosse, trying to weave in as many authentic details as possible. And there probably wasn’t one photo on the internet of the ruins of those cities that I didn’t view.

One of my biggest challenges, though, was in trying to understand where those cities were at that one particular point in time.  Viewing maps and photos today show us what a city looked like over hundreds, even thousands of years.  What looks like the ruins of a huge metropolis to us, may have only been a small town when the events we’re studying took place. How can you know the difference? Recently I’ve come across a couple of interesting websites that would be helpful to anyone writing or reading a story set in history.

Hypercities takes a satellite photo and superimposes maps from various eras right on top, with controls where you can fade out the map as much as you wish to see how ‘now’ has changed with ‘then’. For well-documented cities like New York, you can overlay dozens of maps from throughout history to get a very good sense of how a city has evolved over time. 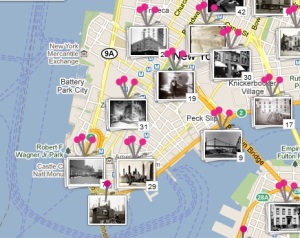 Historypin does the same with photographs, using a similar sliding timeline to fade photos in and out.  What makes historypin unique is that anyone can upload historical photos and write their memories or historical tidbits from various sources.  I could see that being a treasure trove for a writer wanting to capture the feel of a particular period, both visually and through the stories of others who experienced life at those times.

Question: what historical resource would you like to see developed to complement these?

EDC is an award-winning author with a passion for telling imaginative stories resonating with universal truths. His latest novel, Runaway, is a futuristic action/adventure inspired by the book of Philemon. EDC was born in Georgia, growing up in the suburbs of Atlanta, where he now lives with his wife, Amy, and daughter, Emma. Besides writing and being employed as an analyst in the airline industry, he has worked as a volunteer with youth, church planting, and Compassion International. He enjoys landscape gardening, listening to alternative rock, and playing the swordfight game on Wii Sports Resort.
View all posts by EDC →
This entry was posted in Blogs and the Web, Science, Writing and tagged historical novels, history, historypin, hypercities, maps, photos, research, resources. Bookmark the permalink.