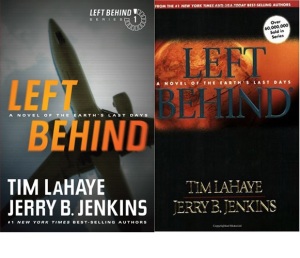 There’s a really cool write up over at the Eschatologist comparing the original and new release covers Left Behind and its sequels. If you are unfamiliar with the LB series (and a few movies of questionable quality), it is an immensely popular work of near-future apocalyptic speculative fiction, chronicling Earth’s last days. I’ve spent many hours reading these books, which have been a big influence and inspiration in my own writing.

In his post, Will Wlizlo reviews the symbolism in both the original and new cover art, adeptly pointing out the possible reasoning and ramifications of the changes.  I won’t recount his conclusions here, but as I read them I agreed with most. He covers all twelve of the original books, including side-by-side pics where you can easily see how he came to his insightful conclusions.

As an author who has designed a cover, I can tell you a lot goes into the packaging of a book. I’ve got a photo album at my facebook page outlining how the cover for my latest novel, Runaway, evolved to the finished product now proudly sitting in the bookcases of dozens of satisfied readers. You can also see some concept work I’ve done for my latest project in my March 2nd post.  Believe me, it ain’t easy to come up with something that will draw a potential reader’s eye to where they will stop and learn more about it.

So, what do you think about the new Left Behind covers?  Is it an improvement?
EDC

EDC is an award-winning author with a passion for telling imaginative stories resonating with universal truths. His latest novel, Runaway, is a futuristic action/adventure inspired by the book of Philemon. EDC was born in Georgia, growing up in the suburbs of Atlanta, where he now lives with his wife, Amy, and daughter, Emma. Besides writing and being employed as an analyst in the airline industry, he has worked as a volunteer with youth, church planting, and Compassion International. He enjoys landscape gardening, listening to alternative rock, and playing the swordfight game on Wii Sports Resort.
View all posts by EDC →
This entry was posted in Blogs and the Web, Books and Magazines, Publishing and tagged Christian Speculative Fiction, cover artwork, Left Behind, symbolism. Bookmark the permalink.